Back in April, Ludum Dare 26 was not so great, as I couldn't participate. It was right after the AMAZE IndieConnect, and this convention drowned my energy so much that I got sick. All I made was some visual experiment, which I couldn't develop much further because the headaches got too strong – partly because of my chosen art style. :-P

So, last week's Ludum Dare 27 was much better in this regard! And after kernel exception, this is the second Ludum Dare we entered together (thus being a Jam entry, not a Compo entry). We had a lot of fun, but also some problems, of course.

Our entry is a first-person shooter, with a little twist: you have five weapons, and every 10 seconds your current weapon switches automatically to another one, randomly selected. And there are "floating devices" all over the world (= a medium-sized planet) which you have to stand near for 10 seconds, so a bunch of power-ups get spawned (ammo and health packs). Enemies spawn in waves every 10 seconds. And when you collect ammo, you basically get an additional 10 seconds of shooting time.

As you might have guessed, this Ludum Dare's theme was "10 Seconds", and we called the game BLAM BLAM PLANET. 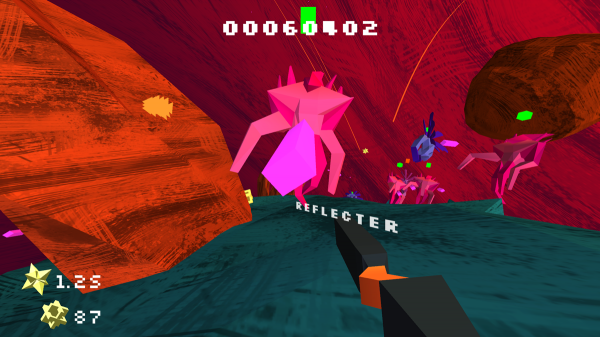 After some minutes of playing the game becomes quite intense, because more and more enemies spawn. If you just run and shoot around instead of waiting at a device now and then for a while, you will soon run out of power-ups, and thus health and ammunition. So it's even a bit tactical, one might say.

The development of the game had its ups and downs, but it went well in most cases.

On Saturday, we thought of the game idea by talking about different possibilities and going for a walk. Ludum Dare starts 3 am here in Germany, and if I remember correctly, it already was afternoon when we agreed on making a first-person shooter, because we never did one really. To make it more interesting we decided that the setting should be on a round surface, which meant the game would need spherical gravity for all entities.

At the beginning we named the game "GLITCHIG", because we wanted a broken look and have destructible environment, so lots of triangles are flying around. Jana started building a neat planet surface with some asteroids around it in 3dsmax, while I started to let my character controller be influenced by gravity pointing to the level origin. Shooting little spheroids was also a priority.

So both Saturday and Sunday were all about getting this right: a planet, a player, a weapon, some enemies walking around. Mostly I tried to get it all working smoothly, by getting the physics of the character and the weapon right. But the hardest part were the enemies and their AI on the round planet. For this, I searched for some code for creating the vertices of a geosphere, mapped this via raycasts on the planet geometry and connected the resulting points – those were then the nodes for the enemies' path-finding. Just letting the enemies walk directly towards the player probably would have been much easier, but less fun to create. ;-)

Another nice part of development was inventing the different weapon effects – two weapons in the final game deform the geometry, so I can push the vertices of the planet around a bit when the bullets hit something. It looks quite ace. As "glitches" was our personal theme from the start we knew the geometry would look strange and broken the more you use this weapon and we embraced that. In fact, when I last played the game, I fell through the level and I could attack all the enemies from below while they couldn't see me – but that also meant I didn't get any new ammo, so it was okay. 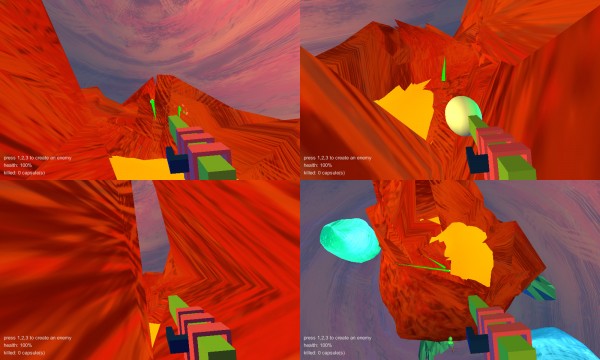 Jana was mostly busy with modeling the three types of enemies and animating them. They look kind of deformed, emphasizing their low-poly nature, and it really looked well. Especially when she added the walk/fly animations, which are really hilarious. When the enemies spawn in masses it becomes a really cool effect.

In order to tie the look together, she also created a color code in Photoshop. After that, the game looked "right", as the colors of most assets didn't need much tweaking afterwards. Having only very few placeholder art from early on really helped the motivation somehow. 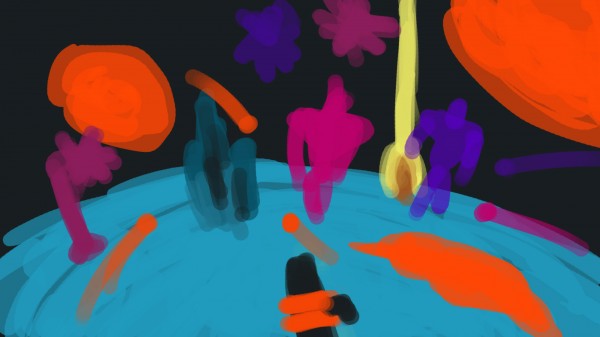 Sunday evening Jana also started to make some sounds for walking and shooting by using our laptop's inbuilt microphone. High tech! All the sound effects you hear in the game are actually Jana's voice. :-) Adding sounds instantly made the game more alive; in the end, you can't have enough of them – that's why she made more on Monday, along with the art for the bullets and particle effects.

On the third day the theme of "10 Seconds" still wasn't in the game, and I thought long and hard about how to implement it. I weighed the pros and cons inside my head of different game mechanics, like "every 10 seconds, you have to collect new ammo" or "activate 10 bases, 10 seconds each, and then you won (whatever that means)" – and only when I finally began to create the five different weapons and let the enemies spawn in waves, the probably best restrictions (automatic weapon switching, time-limited ammo, etc.) came naturally. So there's that: sometimes tinkering too long can be bad, and you should just "do it", I guess.

In the final hours I was able to quickly implement the main menu and a death screen, which always is satisfying as it ties the game together and makes it look complete. Jana made the logo and the button graphics, and also captured a video of the game.

So, that's how it went. Let's take a look on some quick facts about ...

As much as I'd want to extend the game a bit, like adding more levels, I don't think it will get much bigger than now. The feedback of players and Ludum Dare ratings is really nice so far, but I don't know if having more enemy types and whatnot would increase its popularity. An online highscore would be nice, though, so maybe I will add that.

Thanks for reading this post-mortem, and I hope you had as much fun with this Ludum Dare as we had. If you want you can play BLAM BLAM PLANET here! :-) 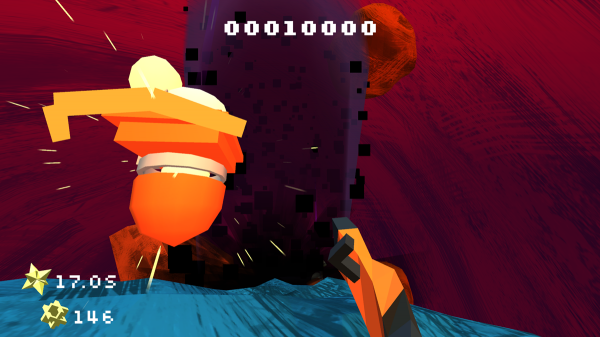