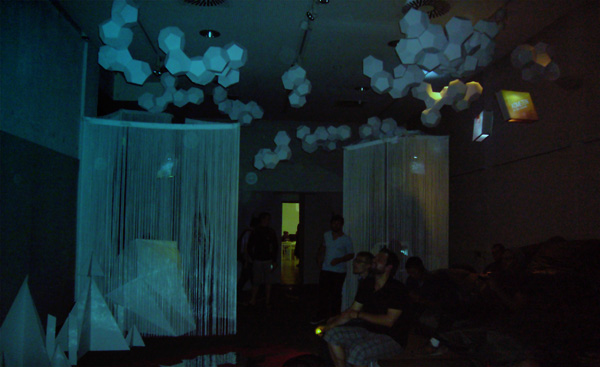 Five years ago Tale of Tales created a game called The Graveyard. You play an elderly woman who is visiting a graveyard. When you walk too fast, she starts to limp. At the end, you can reach a bench and listen to a dutch song about life and death. Afterwards you can leave the graveyard and the games is finished. What followed was a big discussion about this project. Is it a game or not? Should it be called a game? Is walking enough to be called 'gameplay'?

Since then Tale of Tales created a lot more games which fancied me because of their attitude towards gameplay or their way to tell stories, like 'The Endless Forest' or the 'The Path'. As an answer to the reactions towards their games they created the term “notgame”, to describe their kind of interactive media.

In 2011 they even started the Notgames Fest in cooperation with the Cologne Games Lab, a university for game design. They selected a variety of games contrary to the games at the gamescom, which takes place in parallel to their exhibition. 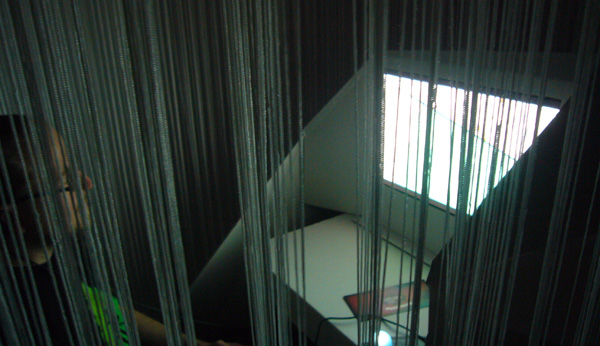 This year they came back to Cologne to present even more games at the second edition of the Fest. Games which – according to Simon Bachelier who was jointly responsible for the exhibition – invite the player to toy around instead of achieving given goals. The area was split into the main exhibition and the playground, where prototypes of upcoming games were shown. Sadly they were presented only on Tuesday, which was also the night of the opening party.

In contrast to the gamescom, the whole place was super-relaxing with little booths that where seperated by white strings. A dark room, just illuminated by the gloom of the monitors and beanbags put in the middle to invite the player to have a good time. You get the feeling that this is the only right way to present games. Instead of joining the party we played every game and discussed them with the developers who where in place.

Right at the beginning you find a game called 'Bokuda'. The first comment I heard somebody saying about it was: “Oh, like Minecraft!”, but if you dive into the clean designed white valley with its black sun, you will recognize that there is more to it. In Bokuda you can built chains of cubes, which at the same time are also your path to walk on. You can slice them and thus physicalize the created object. Then you can smash them. The whole game is like a huge playground with an endless amount of building blocks. What I liked about the game was the attitude, that there was no goal and you have to find your own entertainment in it. Or find out for yourself what this game has in mind for you. Or you for it. 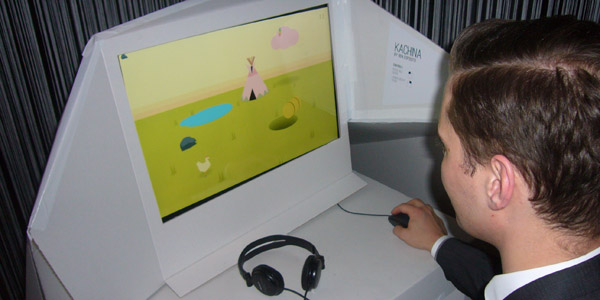 'Kachina' was another game that really caught my interest. The game by Ben Esposito, who got the Indie Fund as financial backup, is something like a physics adventure. Your goal is to clear the area from every object around with a hole. You can move the hole around and 'eat' anything that will fit in it. Sometimes you need to eat small things first to grow for bigger things. Or eat a frog, that will jump out of it to eat the flies that buzz in the air. Instant fun. This game takes the term 'Clearing the level' to the max.

Projected on the wall you can find the so-japanese 'Noby Noby Boy' by Keita Takahashi. You play a worm that eats to grow larger (a gameplay element you can find here quite often). In the two-player mode the both of us tried to realize what actually can be done. The whole stuff looked buggy, couldn't be reset. When we checked the menu the damn worm eats up the text and we never managed to shrink the worms to be able to handle them. Nevertheless we played this thing over and over again. Recognizing that we can eat each other to shit us out was the best. Nice feature! Is this a game about relationships? 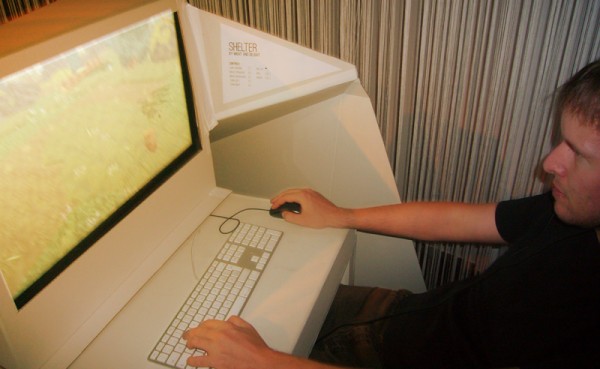 The most interesting game in this place for me was 'Shelter'. A game which I mentioned at the Amaze festival because of its strange emphasize on obvious texture tiling. We discussed the art style a bit until a bystander asked us if we even know how games are made.

Whatever feeling you have towards the art style (I love it, btw), the game is great. You play a badger mother walking her little ones on a journey of life and death. Plainly spoken: It's a linear walk-through with food to find, foxes and frogs to kill and enemies like huge flying birds to avoid. But the whole world really begs for exploration and you start to have a really strong relationship with your little badgers. Try to find food for them, because they get hungry, which is neatly visualized by them getting light grey until they crawl up and won't move anymore. I stopped playing it because I want to buy it, but I strongly recommend this game, if you like exploration and little cute animals that you can call with a click of your mouse. 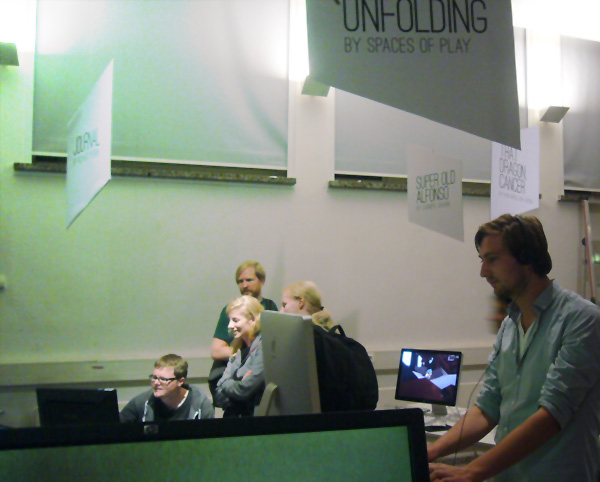 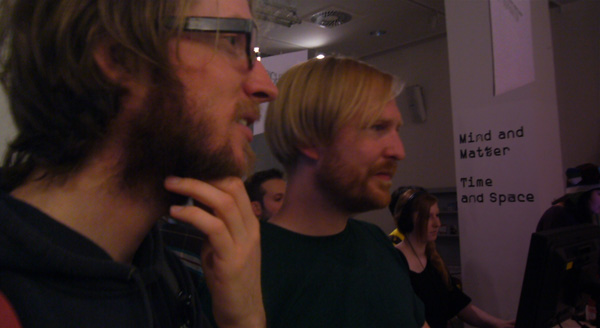 The next room, which I already mentioned above, was just there for one day - the 'playground'. You could play prototypes of upcoming games. Mattias Ljungström from 'Spaces of Play' presented their game 'Future Unfolding' there. The game is in a really early development state, but has an interesting approach to exploration. You are a person who is just able to walk, run or sprint in this beautifully designed woods. On your journey you encounter different animals that all have a different behavior. A rabbit that grows bushes, wolfs that split up every second to surround and kill you. Or the deers that lead you to their leader if you follow them. I just cannot say 'no' to games which take place in woods. 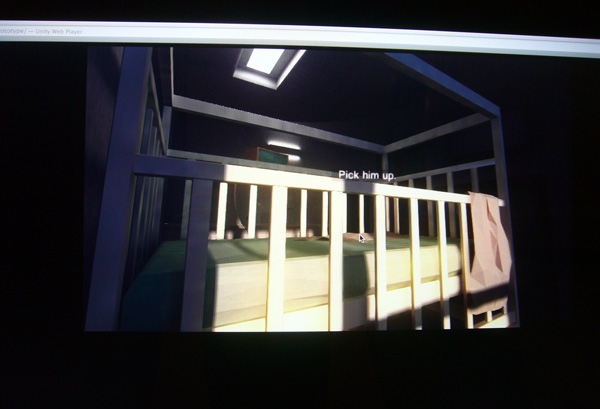 Another project that caught my interest since I heard of it was 'That Dragon, Cancer'. The game is about a father and his little three-year old who has cancer. The game was presented in a very early state as well. You play the man in first-person perspective and can freely explore the hospital room. When you reach certain hotspots he is telling his moving, depressing story about his son. From time to time you take action to feed the toddler or bring him back to bed. But you never see him, because he is already dead (or not implemented?). But you can hear his crying and the desperate attempts of his father to calm the boy down.

Wow. I mean, the game was at it's very beginning and the game part was a bit irritating. But this game shows what interactive media can be capable of. Just the sound and talking in this hospital room made me feel his pain. His true, sad story.

I feel insensitive to switch back to my developer talk and experience, but I'm no journalist, so I stick to what interests me about the game as well: 'That Dragon, Cancer' by Ryan Green and his team will be the first OUYA-exclusive game. Which is an interesting choice for a gaming platform.

And don't forget to play Tale of Tales' own game 'Luxuria Superbia'. I felt lesbian afterwards. And I know that I want to please my iPad more often. It feels great. "Thank you". 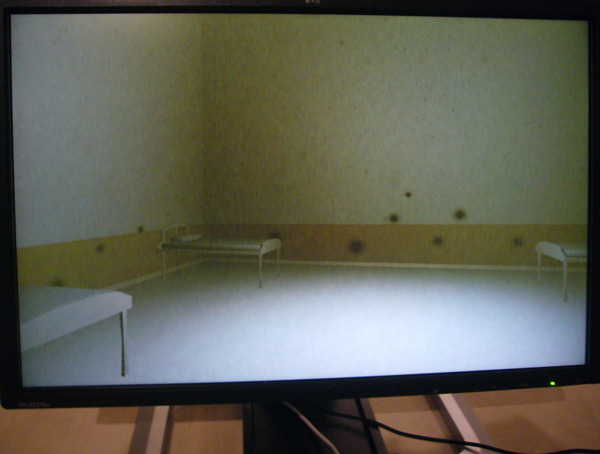 I feel that there needs to be written more about every game there, but games are best been played. So, just take some time, leave the gamescom and check out for the Notgames Fest, because its worth visiting for its nice selection of games.