TRI, our next project, and Advent of Indies

Happy New Year 2015! Well, yes, it's after mid-January already, and Jana's last blog post is from over 1.5 months ago. There just wasn't much to tell since the last blog entry; and still we are not ready to show our next project, which will eventually be our first bigger game since the release of TRI. (Also, I am more comfortable to write blog entries when I sit in a train with nothing else to do, and as I write this one we're on our way to Prague for some kind of short vacation!)

But let's talk about something else first: the Advent of Indies 2014. In our opinion it was a cool calendar this time, with great indies and a lot of people participating in the prize draws, which was nice. On the other side I am not so sure we will do it again (in this form) - too many people sent their material much too late. Especially the Christmas greetings, which we thought were the most important and interesting aspect this year, as they made the event personal and actually caring about the game developers and the community. 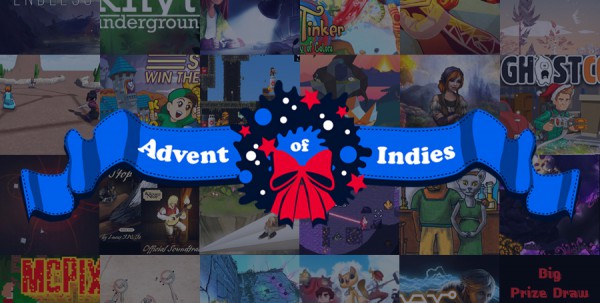 One of the indies didn't answer messages anymore and we had to find a replacement quickly, which resulted in Bumblebee presenting their game Ghost Control Inc. on the 12th day. Thanks for helping out, Tassilo! And some days before the final 24th, everybody who came after was so late with their stuff that Robert Podgorski from BlackMoon Design offered his help and even sent material (for The Few) ready to release within an hour. Thanks a lot! In the end everything worked out somehow and I didn't have to replace another indie, but it was nerve-wracking, to be honest. This is why the next Advent of Indie might change a bit, at least for the participating developers.

Of course this is only the organisation side, which I know will never be without problems, especially if you try to gather 22 different people, all with their own plans and schedules. So we want to say thanks again to everybody who participated, who wished us a happy new year and who gave us a bit of feedback! Traffic seemed to have increased at least for some, which is actually just a side effect of our goal: we mostly wanted to spread some joy and bring the faces of indies in front of the community. Personally I loved when an indie was personal in their Christmas greeting. :)

Another thing not going as planned is, of course, TRI. A short retrospective: TRI was the game project we started to plan end of 2011, and which was finally released in October 2014 on Steam (with the help of our publisher Rising Star). Boy, what a ride! It was our biggest achievement in 2014, and we are glad it's over, although I still plan to do at least a small update for the game, perhaps even adding official Oculus Rift support. Because some people actually like it when they get dizzy, apparently. ;) 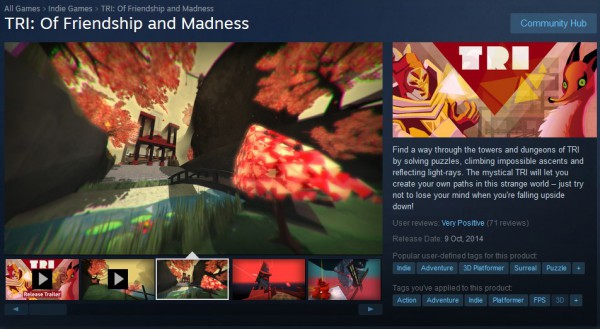 Unfortunately the game is not doing as great as we would have liked. While the reviews and general reception are mostly positive, TRI is missing the visibility in order to be actually profitable. It's just that not enough people play or even know the game. After three months on Steam the initial drive is long gone and we're stuck with a meager 70 user reviews on the Steam page. Everybody who really wanted the game probably got it in the Holiday Sales. (I find these big sales dangerous for the percepted value of games, but I won't go into this topic for now.) Apparently TRI is on a lot of Steam wishlists, but I don't think you can trust this too much - I saw people with 500 games on their wishlists...

Right now a small bit of money is dribbling in every month, but this will change soon enough. There's too much games out there nowadays, all craving for attention. Last I heard 300 games got released on the iOS AppStore in 2014 EACH DAY. And Steam isn't that much better with 15 to 20 new games daily, especially if you consider the price difference. I won't blame the market only - of course we also failed to generate a hype for the game, and even after over two years of development it still could use some polish. A real, thorough analysis is probably only possible after six or more months.

Yet we are thankful that we were able to work on such a grand project, and we learned a lot over the development time! Oh, and did I really imply that we worked for around three years on TRI? Well, this must mean that the Rat King became four years old two weeks ago! Happy birthday! 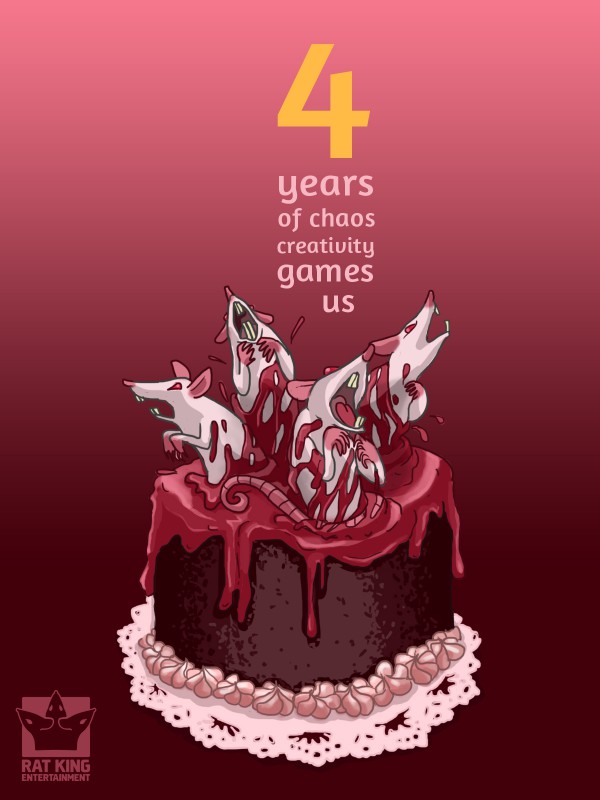 Yes. These are rats bursting out of a cake. Why not!

Our next project is still not planned to the fullest. Some important points are clear, but that's about it - we want it to be smaller than TRI, with less development time. We want to be on more platforms this time, especially mobile, not only desktop, which means it should support touch controls out of the box, ideally gamepad controls too. And it should be easier to handle and get it, so there should be "fun" right from the start.

Of course we already have some more concrete concepts, but nothing is totally set in stone. There's still a lot that can change on a whim, just because we think it would lead us into a dead-end eventually. Slowly but steadily we gain confidence about what we're going to do. By the way; if you played our old roguelike Pitman a bit, it wouldn't be wasted time if you could write about which parts of it you liked, and which you think totally should get changed. We need some feedback on it for research reasons...

TL;DR: Happy new year! Advent of Indies ended and was exhausting but cool. We wish TRI would be more popular. Our next project is on the way.