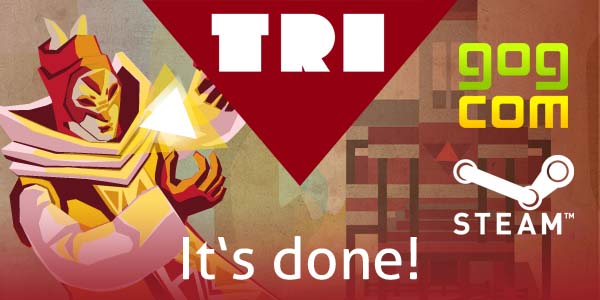 In the last weeks, months, years and especially the last days there happened so much with TRI that we needed a little time-out and totally missed a realtime RELEASE announcement on our own blog. This is the catch up - we happily announce that WE DID IT. TRI is finished!

Well, except for the trading cards on Steam and some minor bug fixes... A real game project - it seems - will never be really finished. And there is, of course, still so much work to do to spread the word on every channel and try to reach out more journalists and YouTubers to take a look at the game.

Although - there are already some pretty cool reviews for us. I think the HardcoreGamer review, which also has an entry on Metacritics, nailed it: 4.5 out of 5! That was indeed a nice release gift for us! The Steam reviews and people telling us that they finished the game are the cherry on the cake after all the efforts.

We also did an interview (in German) on the evening of our release with Manu from Insert Moin.

Oh, and in case you wondered where this sneaky name extension ("Of Friendship and Madness)" comes from: one night before the release we learned that it is impossible to add TRI to curation lists. This is because if you try to find the game via auto completion, it rather chooses more popular games like Counterstrike for you instead of TRI - and the curator lists only work with auto completion. So that's why we added "Of Friendship and Madness".