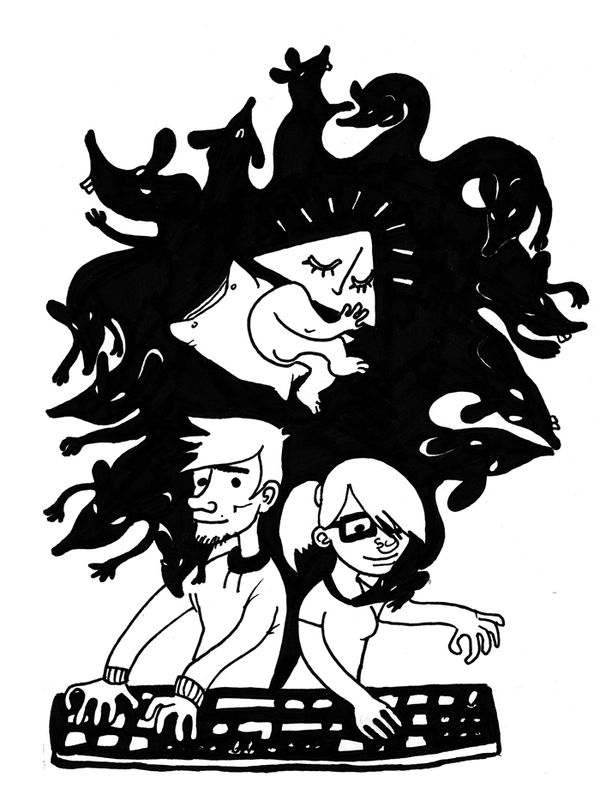 after so many months of developing and prototyping we unfortunately have to let our little TRI take a longer nap. The reason is quite simple: money. The purses need to get refilled, which means we do some contract work for now. We are very sorry for this delay, and have to confess that we were always a bit naive about the release date. TRI was growing, but too much into a direction we couldn't handle anymore. This also means that we will adjust the design and scope of the game to be a better fit for a two-headed team.

But we will continue working on TRI - by the beginning of next year!

And you will hear from us soon enough. There is still the voting going on for the Ludum Dare #24; the Indie Buskers will be back with special guests for a second jam; and Friedrich is going to host the Mini Ludum Dare #37 at the end of September. TRI may be asleep now, but the Rat King isn't!

Don't worry. It's still TRI we're working on! But together with four other developers we did a jam in April to make games AND raise some money for our main projects.

It seems that all of our games are initially made for game jams. And so it happened with The Sun Is Deadly, too. The first version of our vampire stealth game was done in 48 hours, during the Indie Buskers Jam.

We did games after themes given by the audience. Our choice out of 1400 ideas was: "It might be cool to have a game where you control objects to block sunlight to create a path of darkness - so that a vampire can get to their intended victim."

One of our all-time most loved game is Thief: The Dark Project, where you play a thief trying to stay in the shadows to pass guards and empty houses from their sparkling materialistic burden.
Since the moment we first played this game we planned to integrate the element of hiding in the shadows in one of our own games, too. And then this idea appeared and we couldn't resist!

How super-optimistic and stupid we were! Too big ideas of whole sandbox cities, guards with changeable heads, male and female citizens appeared right before our eyes.
In the end we got a game where you had to find the one and only holy virgin to trick her to the cemetery with a jewel case. You need to walk in the shadows, because it is bright daytime and, you know, “The Sun Is Deadly”. On your way there are more victims to satisfy your hunger with. But they will also alarm the guards who protect the city of women. 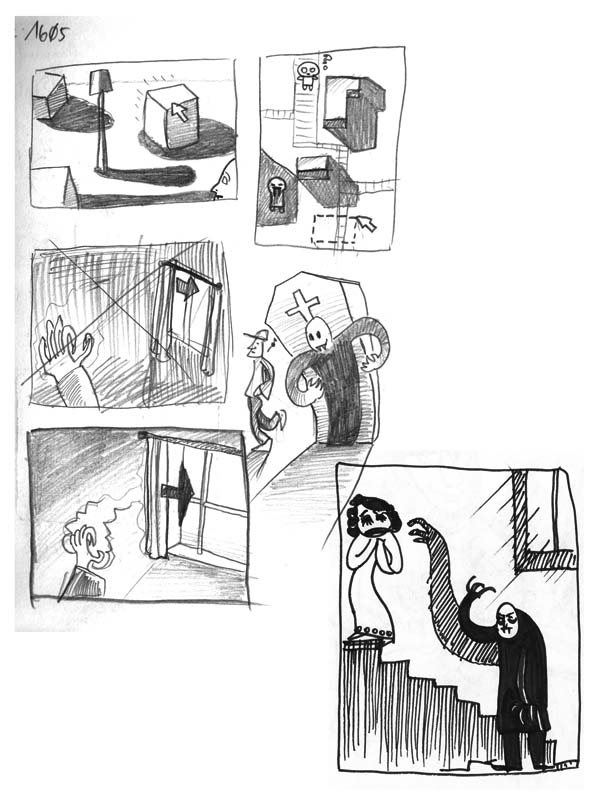 The jam started and we were very self-confident, because we are two experienced designers, especially in game jams. Anyway, our planning what exactly should happen in the game was a bit quirky, to stay flexible with our features.
The biggest concern about playing some shadowy creature was the shadow itself. Would we be able to rebuild the genius Thief component in 48 hours? We tried to downscale the game as much as possible to get time to surely implement the most important features. Right after the stealth stuff there was the other critical feature: physics. Everybody loves physics and the game idea wouldn't be fully translated if there was no crate to lift up. 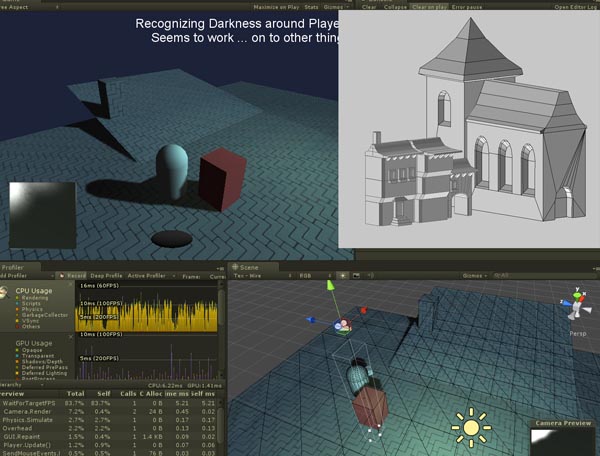 The first step was to create a starting character controller and to recognize if there is shadow underneath the player or not. To detect the darkness Friedrich used a second camera, rendering to a 32x32 pixel texture, to find out if the sun should burn your flesh or the shadow will hide you.
Meanwhile, Jana modeled the town buildings. To give the game a certain atmosphere she chose bare stone, clay and wood to give the impression of a rough, dark, old century. Sometimes she googled "old London street" to get inspired. Maybe because of the Jack-the-Ripper killing women by night in this setting, too. Macabre, huh? 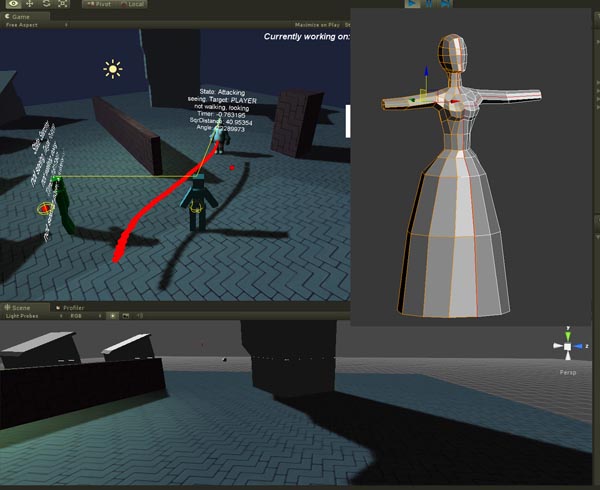 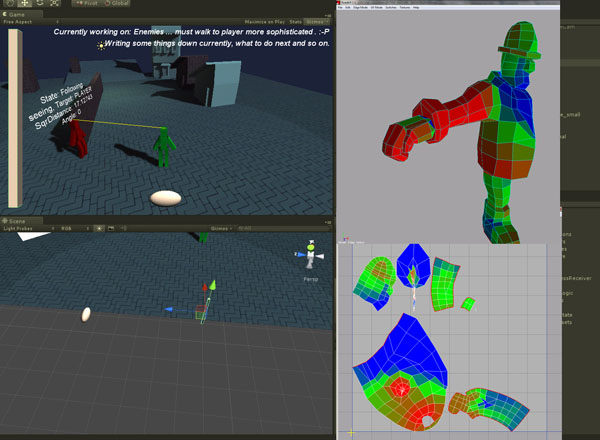 The next day Friedrich implemented the enemies. It was decided that they should see you while you're not in shadow at a short distance. And when you touch them while walking in the shadow, too. Moreover you are hidden behind them and rearward of obstacles like crates.
The character A.I. is very simple: The guards follow you. The virgins run in the other direction. All of them shout for help, which means they alarm nearby guards.
In the meantime Jana prepared the female character - which ended up in a cliched Disney girly that she always wanted to be make. The guard also was inspired by Disney, this time by the police in the Mickey Mouse comics. Maybe the characters are too comedic, but through the forced minimalism the whole game is exactly this - a nice cliche with a slightly comedic approach to the whole dark genre. 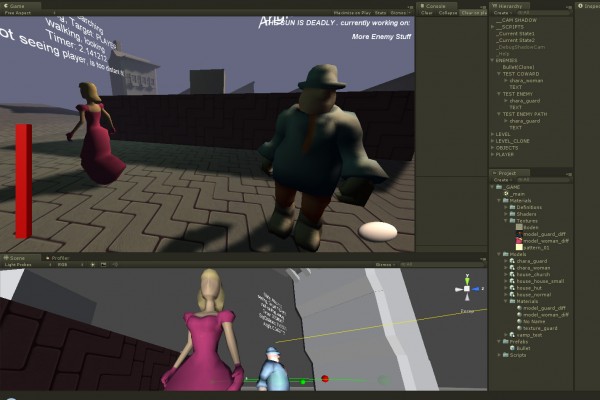 We always think that first-person is the best perspective to play a game like this, so our vampire-player got a nice bloodless thin white arm. To make a good use of it we build our levels in the last step. All towns have in common that they have a simple ground plane encircled by high walls we both modeled in 3ds Max. In Unity we added the houses, crates, decoration and the characters with their optional walking path. 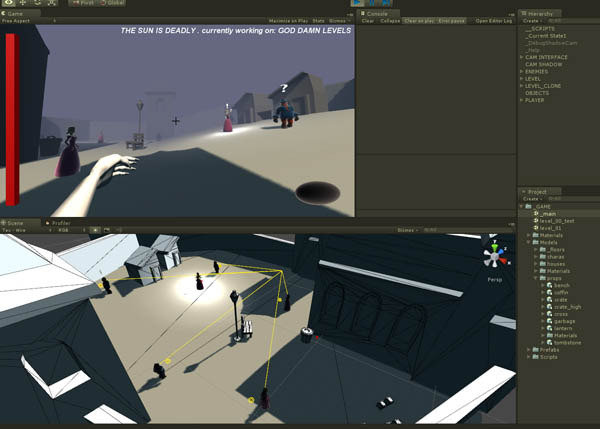 When the imaginary clock was ringing (i.e. the jam ended), the game was super-hard, had only three levels and no sound effects, and the tutorial was full of punishment instead of one reward after the other. (At least we got a nice music track from dasRaguu, who spent his spare time for creating it in record time.)
The shadow thing – we did a Plan B if it won’t work at all – performed very well from the beginning. The tricky thing about Thief though weren’t the shadows (who could have guessed!?), but the enemies in combination with physics.

BUT! We did it! This jam was an emotional roller coaster. Although this is the first jam rule we tell everyone about, we planned too much for the game. The idea was extremely complicated from the beginning. The sad thing with 3D, physics AND shadow is: They are very rare and we now know why. But in the end we fixed most shortcomings - bugs like boxes falling through the ground and virgins not following the shiny present, or the tutorial which explains what the ultimate goal of each level is. 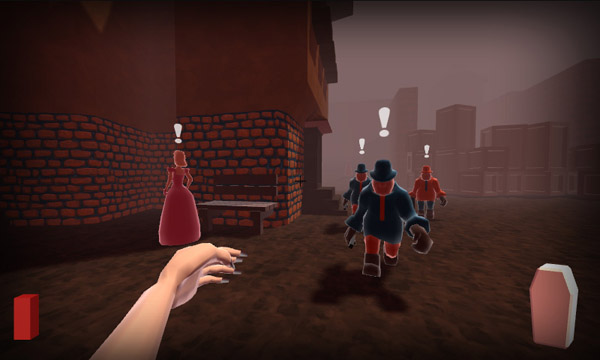 Now that the game is finished, playable and available for those who missed the Buskers Jam, we hope to give you a good impression what The Sun Is Deadly is about. Hopefully you enjoy the game as much as we did making it. We are always open for your experience you had with the game. Tell us!

The game is available at:

Welcome to the Rat King's shiny new website! The old one was pretty worn-out, and it was made in a time when we didn't have much projects to show. After a year and three months, and after several game jams and two iPhone games, this has changed! So the front page now is dedicated to the games we made, and eye-candy is everywhere to be found. Enjoy!

In other news, Friedrich wrote a post-mortem about our Seven-Day-Roguelike Challenge entry, Me Against The Mutants. The game was made for the challenge AND the Pitman Birthday week, so a review of the game's creation was just mandatory.

Last, but not least, some of you may heard that we are part of the Indie Buskers!

The Buskers are a group of indie game developers who happen to have a thing for game jams:

They also are not very rich. So they decided to make a public game jam where they create games based on suggestions they got from people all over the world, and accept donations while this game jam happens. The Busking is set for the midst of this month, so visit us on April 14th to 15th!