On December 15th, Ludum Dare 25 started. As usual, this 48h game making compo was an interesting experience, as exciting and awesome as it was soul-crushing. But this might be just me.

Like before, I didn't have the right idea for the theme. This time it was "You are the Villain", which was a better theme than usual, but unfortunately it only triggered gameplay concepts for me which all belong into the "that was already made before" category. So the first thing coming into my mind was "Dungeon Keeper", and as much as I'd like to do a game similar to this awesome piece of gaming history, it just would be a clone without the right amount of innovation (or would it?). Among the other ideas I had were a "Pirates!" roguelike, a game where you control four bandits at once (robbing innocents and wandering around) and a board game creator where you're the dungeon master placing the monsters (think "HeroQuest" or so).

None of these ideas were the incentive for me to actually start developing (although I still like them). In my mind, I combined them, added features and the result got bigger and bigger, and after finally deciding that it would be too much of a hassle, I started at zero again. Then I came back to a thought I had days before, namely the thought that often, good ideas for games (mostly puzzle platformers) are those which are inspired by childrens' fantasies. So I imagined a bit what a child could think, and being able to grab the moon with the fingertips and move it around just like that, well, that seemed like a good candidate. At this point, the theme was still in the back of my head, but I tried to ignore it mostly as it obviously would just hinder me to actually develop anything. I never was good in the "Theme" category, and for that I'm sorry, but I don't think it's the category I want to shine, really.

I tried to create a Unity3D prototype out of that idea with the moon. Of course, prototypes become the real game eventually when doing a game jam, but first I wanted to see if I could actually create something like that. The main problem to begin with was the scale of the object currently grabbed, as it always has to be the same size for the player, no matter how far or near it would be away. I read something about the focal length of a camera before and I thought I had to factor this in in any case. I experimented (using some basecode I already announced in my "I'm in!" post) and searched on the internet, but it just wouldn't work right. The object's subjective size didn't stay constant, and being very frustrated, I stopped after a while.

Thus, I re-evaluated the idea of the four bandits. This one would follow the theme and I'd really like being able to control a group of (evil) adventurers - in first person perspective! In order to make it easier for myself, I started programming the movement (again in Unity3D), which would be along the cardinal directions only and also on a grid. Just like those age old games you might know, "Dungeon Master", "Eye of the Beholder" or "Legend of Grimrock". In the end, the movement worked somehow, and you could add NPCs to your party, and press a button to see all four viewports at once. Probably I could have made a more or less full game out of it, but at this point I didn't see how I could add "fun" easily and I stopped yet again. 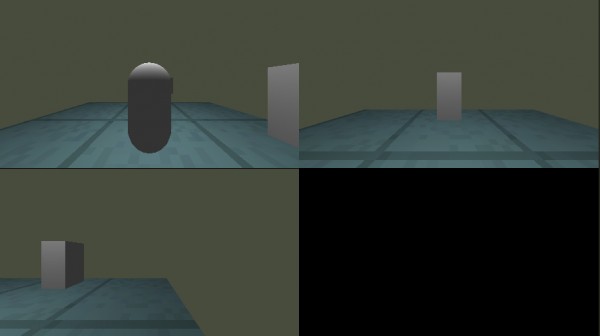 With the thought of fun being the most important part of it and without really expecting any results for this Ludum Dare anymore, I got back to the first prototype, and suddenly, the old problem was gone. Thinking about the focal length was a dead-end, and just getting rid of it was the way to get it work. The only problem now was the collision detection of an object that would get bigger the further it goes. Using Unity3D's SphereCast() was the wrong direction, because the size of the collision sphere would be always the same. So now CheckSphere() gets called with a gradually increasing size of the radius parameter, and it does that a lot of times every frame - because of the simple nature of the rest of the game, this was possible without any noticable performance hits (at least on my computer). Of course, this means that every object basically has an additional bounding sphere, and that's why most objects sometimes don't behave as expected, especially those which don't have uniform dimensions. 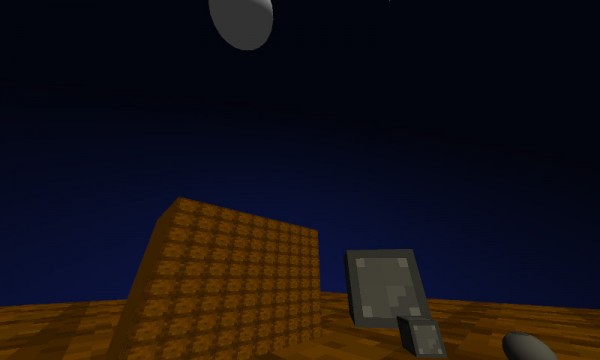 I uploaded the first prototype of the game - just a simple demonstration of the gameplay - late in the night, and those who actually started it and "got it", said it could be awesome. Yay, motivation! Also, I earned myself some sleep. The next day I "only" had to make levels and fix any occuring bug. Also, story. Also, sound. Also, ...

I planned five levels at the beginning, and because of some very sad events before Ludum Dare, I didn't think about it too long when I realized that I wouldn't have time for all of them - as one of the levels would had have a kindergarten setting. So, three levels were made (in 3dsmax), and they describe how the protagonist is a kid with just an overly active imagination, and how this leads to an unfortunate outcome. I didn't have time for more, and the ones I made aren't really balanced/tested, so I am sorry for that. On the other side I am just relieved that the main gameplay works and can maybe be the foundation of a cool game; the Ludum Dare version of the finally named game "Tale of Scale" is mainly a sandbox game which happens to have a subtly communicated goal in each level. 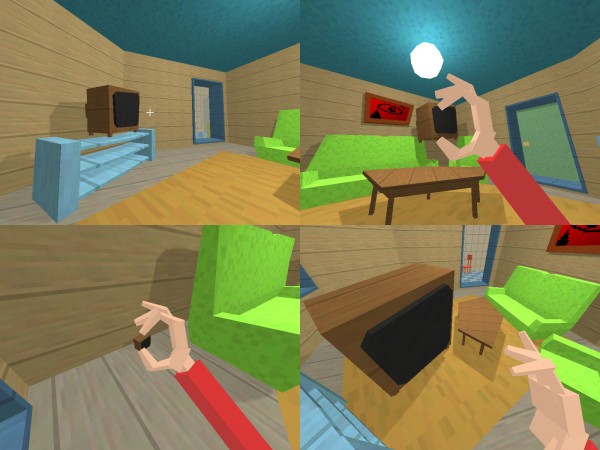 the end result: Tale of Scale

A short summarization of What-Went-Bad:

That's it! Thanks for reading, and don't forget to play the game (here's the entry page) - or at least watch this gameplay video: