(This post mortem can also be found on the official Ludum Dare blog!) 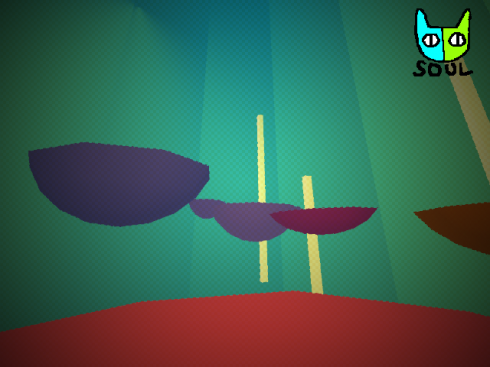 Ludum Dare 22 was somehow pretty exhausting for me, and kind of depressing. I don't exactly know why, but I think that multiple factors brought in.

The weekend before the compo I made a "warm-up game", even though I planned to do it long before PoV announced this kind of thing. I just wanted to make a game in 48 hours in order to help a friend (a 3D artist), who needed a programmer for his university project. The programming part wasn't wasting, but the fact that the game didn't get finished at this weekend (mostly because of my friend :P) left feelings of "incompleteness" inside me, which I hate.

Another thing: I didn't like the theme "Alone", and I still don't think it was the best or even a good theme of the ones in the final voting round. But, as I always have to live up to my own standards I wanted to follow the theme AND make a good game. And this often leads to a status-quo - as long as I don't have the right ideas I won't start, and as long as I don't start I won't have the right ideas. Or something like that. My mind was blocked and I did other things, like playing Skyrim and chatting on IRC (not in #ludumdare, though, that place was CROWDED). Later, I started Unity3D and tried to play out another idea I had days before, about some time manipulation gameplay. It wasn't feasible to do it in Unity3D, but due to the fact I did something concrete (game with 3D environment and FPS controls) I could develop another idea in my brain, which became the concept of the final SOLILOQUY. 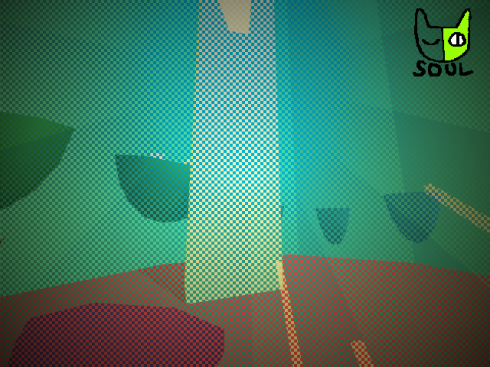 I still think the best part of my game is this name! I thought of it before I thought of the gameplay (but it didn't give me any directions), and I liked it so much, I wanted to use it in any case. I'm quite happy nobody else named his/her game the same, too.

Even though I have some experience by participating at Ludum Dare before, I still don't really know how to cut back optimally. The concept of SOLILOQUY demands levels, and levels demand content and art and story and design and choosing colours and making 3D models ... but I knew this would be hard for me, as it was when I made my Ludum Dare 20 game, "TRI". So I decided to do NO textures this time, and it didn't hurt much (on the game's side), but the benefits weren't that great either. I mainly put the levels together in Unity3D instead of 3dsmax (in contrast to TRI), but this didn't help me much, either. Altogether I have six levels now, where I really wanted ten, but at least seven.
The levels don't look that bad (abstract style for the win), even though I chose the colours quite randomly. On the other side, what I don't like much, the levels are all tutorial missions only. You just jump around in the first two, learn using your souls in the levels after that, press some buttons and work together with yourself. After this, the real levels should come, but I didn't have time to do any more content.

I finished the last level three hours before the deadline, and I couldn't do any more creative stuff. I especially failed in doing sounds or anything like music, unfortunately. I thought about using inudge.net again, but it would sound like my other two Ludum Dare games, so I dropped that idea. At least this frustration encourages me to actually learn how to make simple songs with real tools. (Wish me luck.)
The reason why I couldn't do more creative work: This time, Unity3D was my enemy. Sometimes I really had to fight the engine, mostly when it came to the text you see in the game (story & hints) - Unity's GUI system still is awkward to look at, and it has bad effects on the performance. So I used someone's code which displays bitmap fonts via SpriteManager (the original one), but it didn't work out of the box with all my bitmap font generator tools (I decided to use "TWL Theme editor"). After those problems were resolved, at the very end of the process, suddenly my white text became gray in the webplayer version. Argh! I needed nearly an hour to find out why that happened - a plane with alpha (the dark overlay) had the same distance to the camera as the text, and somehow the editor sorted it differently than the webplayer. Whyever that is.

After the mixed (or even bad) feelings I had about my own game, I'm really relieved that people actually liked it! The current feedback is mainly positive, and some things that were criticized are fixed in a post-compo version (on Kongregate, for more attention)! Other things, like the jumping height / range being too crass, are somewhat subjective and unfortunately can't be changed without rearranging some of the levels.
Of course, many people complain about the brain-hurting aspect of the game (gameplay and visuals alike), but that was expected. I could have done the double-soul mechanic with just a picture-in-picture style or something like that, but then the game would lose its uniqueness pretty fast IMHO. Also, as soon as dogbomb does his "I play your game drunk!" video, the whole game visuals will make much more sense, haha. 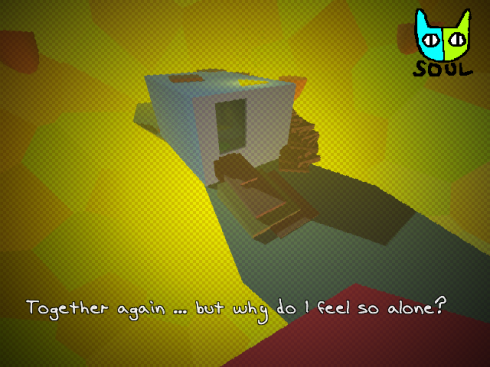 BTW, if you have a look at the source you will need Unity3D. The indie version should suffice for just reading the C# files and so on, but you need Unity Pro (or its 30 day test version) in order to actually start the game, because I used Render To Texture. Sorry!

Thanks for reading this wall of text, and don't forget to PLAY THE DARN THING!

PS: There also is a video now!