The voting phase of Ludum Dare 22 finally ended and my hopes to be in the Top 50 were fulfilled - even more than that. "Soliloquy" is on the tenth place in the "Overall" category and, even more satisfying, on the third place for "Innovation". This really is something to brag about if there are 717 participants.

For me, Ludum Dare is about trying new things, and being rated by many fellow game developers so well in the corresponding category is really rewarding. Still, I stand to my rather ... negative port mortem, as this Ludum Dare made me feel very exhausted. But I saw that the next Ludum Dare in April 2012 will be an anniversary, a round 10 no less, so I'm tempted. :-)

In other news, there is, or rather: will be, Tri 2. "Tri" was my entry for Ludum Dare 20, a game about creating triangles in the game world and overcoming obstacles with them. The feedback for it was highly positive, so we are making a full version out of it as our first commercial PC/Mac game. 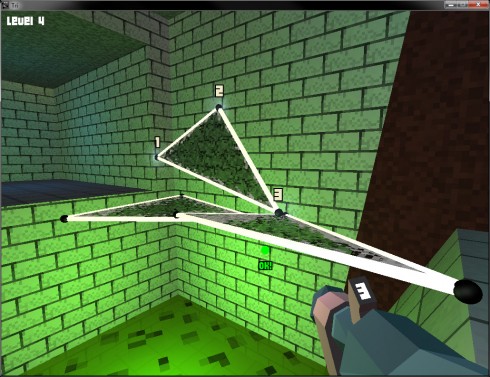 Of course, everything will get changed. ;-)

There will be a new setting, a new story, and more gameplay. There is nothing written in stone right now, so I don't want to spill most of the beans just yet.

But in order to keep myself motivated, I started a devlog on the forums of TIGSource, with status updates, thoughts about the process and the occasional screenshot. And we have even more plans with it: for the first time we want to try crowd-funding, for financial support of course, but also as some kind of marketing multiplier. The plan is to start a campaign in February, as soon as we have enough material, like a functional prototype, or concept arts from Jana.