TRI is a game with a long story, so I won't even attempt to remember every detail. Instead, I will write down what comes into my mind. This way the following article might be a bit inconsistent; I hope it's still an interesting read.

The story begins in April 2011, when I participate for the first time in a big Ludum Dare event. It was the 20th Ludum Dare, with the theme "It's dangerous to go alone! Take this!" (a quote from Zelda) – but the theme didn't really matter, as I got the idea for my entry the evening before. I was inspired by working with 3D modeling software, where you create and manipulate polygons, and I thought: how could I use that for a game? Good thing the eventual Ludum Dare theme kinda fit – I just equipped the player with a "Tri Force Field Gun" (the "this" for the theme), and TRI was born, where all you do is creating triangles to walk and jump on them, and solve a few puzzles.

My entry was kinda successful: I submitted it to the Compo, but eventually switched to Jam, because I copied a character controller from the Unify wiki (as Unity's inbuilt one was too wonky). The Jam worked a bit differently back then, so my entry didn't receive any ratings. But PoV featured TRI in the results announcement post, and people who played the game (the community of Ludum Dare, and players on Kongregate) liked it well and some even asked for more levels.
A few months later, in October 2011, we were searching for a cool new project. Somehow we convinced ourselves that we could create a full version of TRI within a few months, which of course was very naive. We actually already made two commercial games back then, but as those were done in a much shorter timeframe and were for mobile only we still underestimated how hard it is to make a full-blown game with individually designed levels, somewhat complex gameplay, physics and a story-line. Also – and this was the worst part – a lack of clear direction (due to missing experience) hindered a straight development, and so we changed the design several times before TRI became the game you can see and play nowadays. Of course, we learned a lot during these three years, but I often wish we would have learned this stuff faster.

TRI was made by Jana and me, Friedrich. Jana created the visuals and most 3D models, while I programmed in Unity/C# and also made the GUI. We both created the levels and searched for and worked on the sounds. The music was composed by my brother Ludwig.

It is still funny for me how each department is received extremely differently by different people: some love the graphics, some find them bland. Some adore the gameplay, some think it's clunky or just headache-inducing. Some bought the soundtrack, some just found it repetitive. I know that tastes differ, but as most feedback nowadays comes from official reviews, it's just silly how one piece of opinion claims that our levels are "not convincing" while the other describes them as highly genius.

But yeah. A lot of reviews miss the "polish of Portal" in TRI, and I can't do anything else than concur. We are a two-man team, still learning, with a fraction of the budget of Portal. I guess the secret of success is to hide such facts as well as possible, but I don't know how. So the biggest learning for us: we won't do anything this big again soon. At least we shouldn't.

We even had to take breaks during the years, because of interfering contract work, or just because we had to take some time off. Both didn't make development any shorter, and if Rising Star wouldn't have approached us to give us some funding and a deadline to kick our asses, we probably would still work on TRI (or having a break from it).

In reality, TRI was a good project for a small team, as the game has a narrow scope: the main gameplay is about creating triangles, and almost all of the other mechanics somehow work with this mechanic. For example, there are light rays, and you can reflect them – with the triangles. And you can walk on the walls and the ceilings – thanks to the triangles. There are also some basic physics puzzles (dropping crates on platforms and so on), but the physics are built into Unity. So how did TRI become a "too big game"?

By not being absolutely clear about the game's direction.

One indication for this is the game's story. We wanted a background story from the beginning; the original TRI has one, although fairly simple and only communicated via texts on walls. And yet it added a big portion to the package – so we still think some kind of narrative is necessary as a hook. Just think of how showing triangles would be boring for reviewers and YouTubers. This is why we needed some characters in the game. Unfortunately our story changed a lot during the development, or rather: the whole design and with it the story. From a sci-fi setting with a mad professor and a fantasy story with an alchemist, to the now present fable about a Monk and a Fox. This last iteration of TRI's plot feels a bit tackled on sometimes, and really you can still complete the game (hopefully) even when you skip all story bits (hopefully not). So it's there to entertain, but the narrative sadly isn't an integral part of TRI.

The most problematic thing was that Jana and I never fought over what TRI actually should be – at least there never was a clear winner. Jana was all for making a game about atmosphere and looking at nice architecture. I on the other side was totally focused on the gameplay, and how there should be a lot of puzzles, because I feared people would be bored otherwise.
This way TRI became a game with two souls – there are parts that are mostly about the design, and parts that contain a lot of riddles and obstacles. Thankfully it doesn't feel too much like a game with multiple personalities because Jana added her personal touch to each level after they were done by adding the textures and decorations. And fortunately the Monk and Fox also help to string them together, at least in my opinion.

Nobody ever complained about the sound design – apart from our very own voices for the climbing. Still, this fact is kinda great because although we actually tried to hire someone to make sound effects, the deal didn't come to place and we found our best partner in freesound.org – really a great resource for indie developers. Most of the sounds actually were done within a few days. Sound design may be something that we still neglect, but TRI didn't focus on sounds anyway, even though we wish we had time to create atmospheric "sound carpets" for each level, because sometimes everything is silent and nothing happens, and it then feels a bit too lifeless.

Although we normally tell everyone that the game was released on 9th October 2014, we actually put TRI online for the first time in June 2012, as a "pre-alpha", which was a stupid description. We renamed it quickly to "alpha", and a bit later I also tried to get rid off the version numbers (like 0.3.0) which always were low and unattractive, by replacing them with something cooler: code names! The next version was then "MagicalMonk", which sounds much more confident.
These early-access versions (purchasable via our website and Desura) were not very successful in terms of sales, but we actually never did much marketing for them. We rather tried to get feedback from people interested in the concept and art style, by pre-selling the game for a low price and adding a survey at the end of the game. The later versions even included the possibility to give direct feedback via an inbuilt form. (Thanks to Jedi for the idea!) This was great, because people could send us bug reports or suggestions together with a game save. And it was a solution for our QA problem – every game needs testers, and this way everybody can be one!

In October 2013 we submitted TRI to Steam Greenlight, and some months later it was finally approved by Valve. It also made a lot more people aware of our game. But unfortunately Greenlight was a better marketing tool when it started in 2012. While the first batches of greenlit games were celebrated by the press, this effect became non-existent, thanks to the countless, bi-monthly batches with 100 titles approved at once – and TRI was part of one of these, in February 2014.

It was like winning $20 – nice, but absolutely underwhelming. On the other hand we're a bit proud of being greenlit before TRI even reached the Top 100, although I am not sure what exactly that means.

Anyway, at least we're on Steam – and as the saying goes: “be on Steam, or don't be”. A little anecdote: to be visible to curators (the new thing on Steam) we had to rename TRI, as the name was too common (think “Counterstrike”) for the search form to work, as it relied on auto-completion only. This is why TRI is now called “TRI: Of Friendship and Madness” (Jana's idea) almost everywhere.

Thanks to Rising Star Games we're also on GOG. GOG was great regarding the release, as they wrote a very cool release article. And you can also get our game directly on the HumbleStore, too!

Overall we are happy with the reception of TRI: more reviewers than I would have expected like or even love the game, and our Steam user score is pretty high – as of writing we have 30 positive and only 2 negative reviews, resulting in 93%. Yet, the game is still missing visibility – Steam, Greenlight and reviews alone don't do that for you (anymore). We need more YouTubers with a high amount of subscribers, playing the game on their channels. And probably some sensible discounts, as it seems a lot of potential buyers are just waiting for the inevitable XY% off sale. I can't even blame them: with so many games on my backlog, I do the same with most new titles.

What can TRI offer you? It has 16 levels created by our hands, 5 different "worlds" each with a different background music and a new look, two animated NPCs, all degrees of freedom, and unlimited triangles. You conjure these to overcome abysses, to block and reflect light rays and lasers, and to walk on the walls and the ceilings. A lot of areas can be approached differently, depending on your own play style. Even some of the puzzles have more than one solution, and I sometimes see people solving them in a new, unique way. There are very open levels where you can fall into the void, and levels with a lot of narrow hallways. You can jump, crouch, climb, run, carry crates around and use levers.

TRI is a bit about celebrating freedom and possibilities, and we hoped that a lot of people would love that. For now, we still have to find out how to reach them. 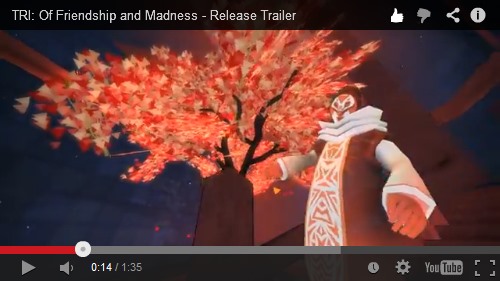 If you enjoyed reading this, you might want to have a look at our Making-of video series, our the rest of our blog.