After I failed at being more business-like and professional, we really enjoyed talking to all the Indies. Especially what they are working on, where their secret jelly glass filled with coins is to be found and, of course, how their business works.

This whole Indie thing was some kind of conference meme everybody interpreted in their own way. Many people reacted a bit bugged out when it comes to the question what is "Indie" and what not.
Some don't like the discussion, because we all need money and partnerships, which doesn't necessarily mean that we are the marionettes of publishers.
Others loved the Indie label to keep out stiff business guys and get recognized even with smaller titles.

And many folks prefer to just call all the little game company start-ups Indie, without making a distinction what it exactly means to be Indie.
Even Thorsten Storno – the host of Germany's first Indie festival didn't come up with a manifest. Although he wanted to, but couldn't afford doing one due to the lack of time. Luckily! Because maybe too many restrictions would contradict with the Indie mind of being independent from stupid guidelines. At least this can be said, I think. 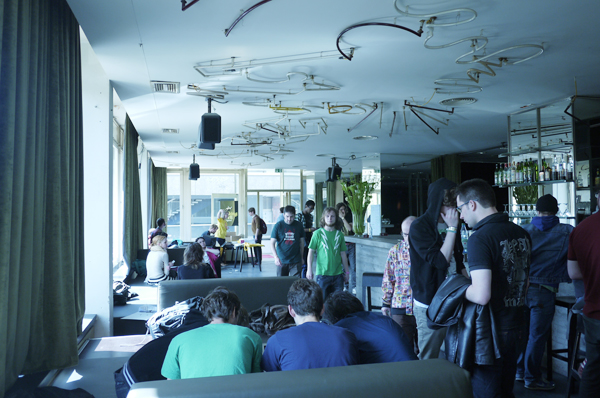 A fact is, that we all need money and that a pure Indie-fication seems to be only possible with sponsorship, waiting tables, freelancing, putting aside our own projects to work at errands or being purely commercial from time to time. So in the end, everybody is Indie and nobody is.

At this point Cactus from Sweden comes in. He held the first talk/keynote and gave us all a telling-off about stopping to be so commercial. After his 2-year sponsorship ended he now has to sell his games, too. Ironic!
I really enjoyed his speech, though, especially as a contrast to the Quo Vadis - he stood there somehow drunk with a canned beer at 11am. Although I was a bit unsure what exactly his point is, but I think he was as confused about him being business punk now, as I was.
Cactus' talk strongly reminded me of Anna Anthropy's book “Rise of the Videogame Zinesters”. Both complain that on the one hand making games is easier than ever, but on the other hand, it is harder to get an audience with free games or in other words, the barrier to gain a foothold is getting higher.
The funny thing about this discussion is that I – as somebody who tries to sell games – saw this always from another perspective: There are tons of awesome and super-creative free games and I never understood why the heck they gave them away for free. Because it basically means that I as an Indie dev who needs money has to explain myself for being greedy.
The developers of free games - on the other side - argue that they get no coverage for not having polished, super-functional games. They seemed to be the Indie Indies, the artsy ones, while we are the black suits.
The good thing is that most of us do both ways, which brings the whole discussion together somehow and makes it dispensable.

I have to admit that I didn't follow most of the talks, again. I think my attention span is extremely short and every talk was followed directly by the next one. A little pause to discuss what you heard just moments ago is very important.
Especially when controversies occur: Martin Nerurkar's talk was about to use every possibility to make and sell games - even free2play. This was followed by a discussion that our creativity should not be destroyed by, let's say, free2play. Like I mentioned in the post about Quo Vadis, free2play and social games are the end of creativity to many game developers. This kind of friction was fascinating. 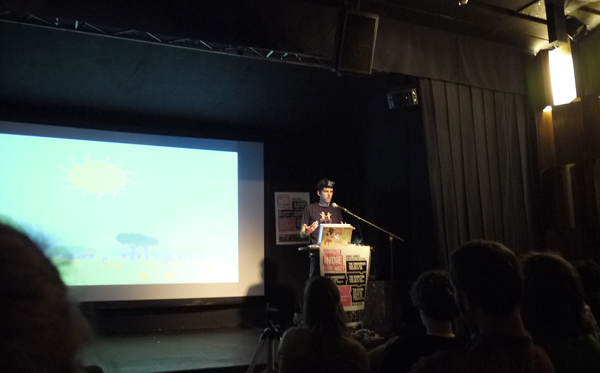 The talks on the next day were interesting and very inspiring, too. Douglas Wilson, member of Die Gute Fabrik and brain behind Johann Sebastian Joust, compared his game with the minimalism in Proteus. He pulled a metaphor about gameplay being the chips and the surroundings, graphics, atmosphere, etc, are the sauce. And Indies too often just think about the chips, which are flavorless alone, but he loves the dip and would be glad if the chips would be more often just used as a vehicle to eat more dip ... I think, that was what he meant!? Using tasty food pictures as a metaphor didn't work for me that well.

This speech was followed by a talk from Thomas Bedenk of Brightside Games about the Flow-theory by Mihaly Csikszentmihalyi and the difference of player and designer perspective. Well – look at the picture. 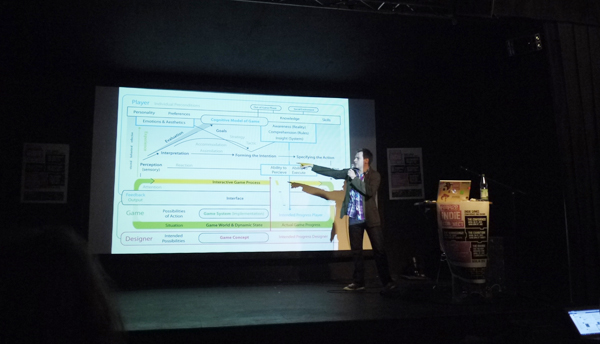 Vlambeer rocked with a lesson about back story. Although it's fun to hear this from the masters of fast-paced arcade games, in my opinion everybody comes up with some kind of fiction. Some for the need of design ideas, while others have a vast epic story early before even knowing about the gameplay. But it's nice to see them playing their games and understanding how every piece fits together. (You can re-read the talk here.) 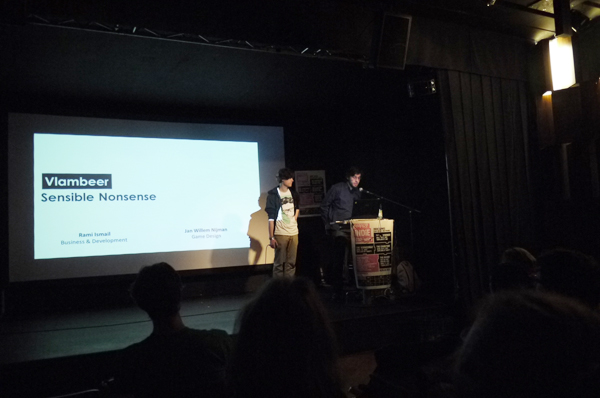 The talks were followed by two workshops. Apparently there was even a third one, called "Lesson learned", but most people couldn't recall the content from the website and a rumor explained that it was about business ("About the art of staying independent") - I wonder if it took place anyhow.

The other ones were about sound and coding with libpd and location based games, the last one we took part in. It is extremely interesting to speak to people like Michael Straeubig, who is a game designer for board and location based games. I think our games belong to the PC, but it's always awesome to get some input from other genres, especially the offline ones.

Again I missed the outcome of this workshop. I think I was looking more for input then laying my hands on gameplay.

So instead we joined the others on a lawn enjoying the invasion of summer. 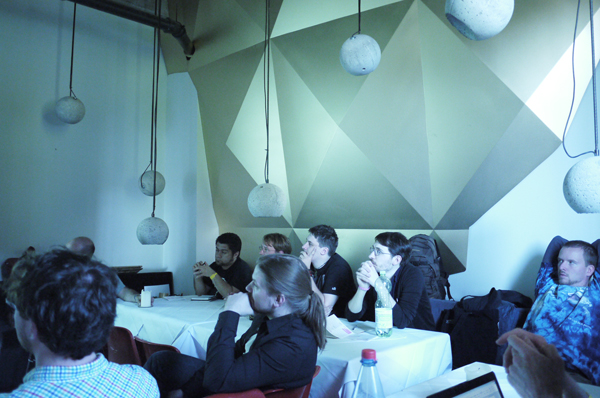 The summit closed with the award for the most amazing game, which was Proteus of Ed Key and David Kanaga.
I loved the decision, because I just bought the game some days ago and was fully inspired. I guess games like Proteus, that suck players into their world without any double-hint what is next or where to go now and what exactly is the point, was the perfect choice for the first award. It was in fact some kind of orientation which way the first edition of the festival should lead to.
Ed, your game is perfect for this, like the festival itself: Not too polished, leaving lots of room for own interpretation of what exactly will happen next.

The best thing, after the award, was the party with the mandatory 8bit electronic music and Proteus playable flashing against the wall. We sat there for a very long time and played it. The best thing: people came along and watched us.
After observing them, these are the five phases playing Proteus:
1. Skeptical look. "THIS won the award?" Erm....
2. Just fascinatingly watching, being completely silent.
3. Curiosity, what this thing exactly about. "What do I have to do, just walking?" or "Oh, I have to follow the frog!"
4. The deep wish to try it themselves.
5. "Oh my god this is awesome. I gonna buy this."

It's funny how people kept playing it, although being extremely confused about this "Notgame". I would love to achieve this one day, without a ragequit stopping people from doodling to find possibilities in the game out for themselves. 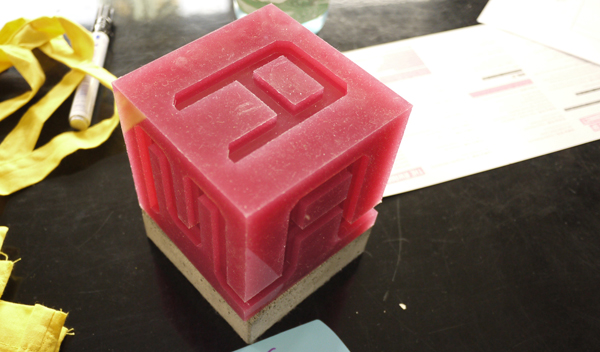 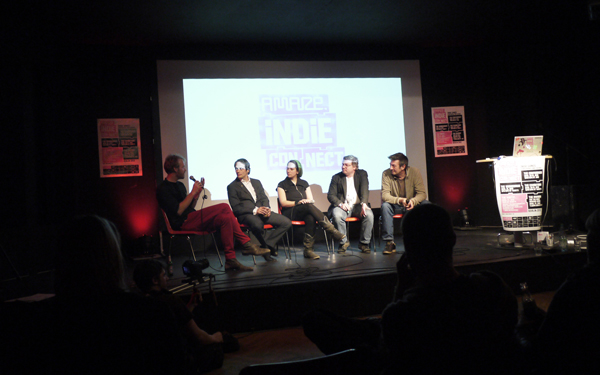 So, the big question from all, who missed the event: Was it worth going to Berlin? Just another Indie festival? "Germany? - I went to GDC San Francisco!" So, next year A.Maze, again?

Answer: Yes, YES, triple-yes. Just standing in the foyer and discussing different standpoints about business, money, gameplay or favorite beer labels made the thing awesome. Meeting many of the well-known faces in person and discover new ones you never heard of before. Or finally meeting the German developers in person, that seldom actively use Twitter or blogs - in most cases.
The talks were more an add-on to be inspired, provoked or initiated for further discussion. But I took home many good ideas, motivation and encouragement for our game-to-be TRI.

And it was fantastic to play all these games during the summit and nibble my nails about who is going to get the fantastic looking lolly-pink silicon concrete trophy. Great people overall … what should I say?

Thanks a lot to the organizers of the whole event! I miss Berlin, this whole communicative, relaxing AND exhausting event plus the international flair - Fuck yeah! In this scene I felt extremely welcome! Thorsten, this was amazing!!!

BTW: Next time with a game jam, please! 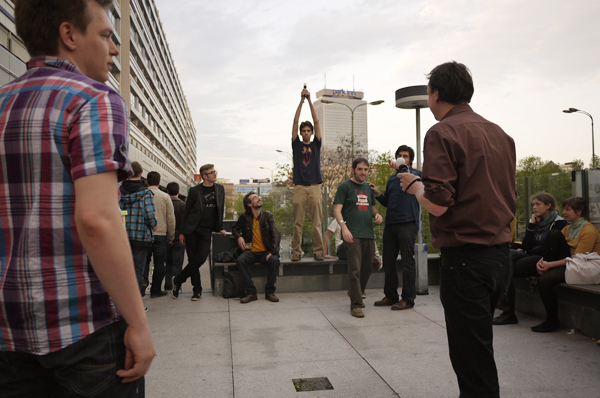